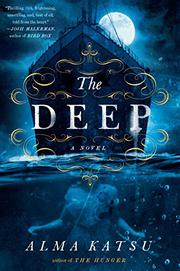 Demons both literal and figurative torment a Titanic stewardess in this supernatural-tinged suspense novel.

After scandal causes 18-year-old Annie Hebbley to flee her family’s home in Northern Ireland, she decamps to Southampton, England, and takes a job aboard the Titanic. The ship contains every imaginable luxury, but when an otherworldly voice nearly lures the Astors’ young servant over the railing, Annie and several others become convinced that the vessel also harbors evil spirits. Four years later, in 1916, Annie is at Morninggate Asylum, convalescing from a head injury sustained in the Titanic’s sinking, when she receives a letter from fellow former White Star Line employee Violet Jessop. Now a nurse, Violet is about to set sail on the Britannic—a hospital ship that is the Titanic’s twin—and she wants Annie to join her. Annie has misgivings, but her doctor strongly endorses the plan, so despite having no medical training, she signs on. The hope is that the experience will help Annie heal; instead, it unearths painful memories that provide shocking clarity regarding what actually transpired during the Titanic’s fateful crossing. Atmospheric prose and exquisite attention to detail distinguish Katsu’s follow-up to The Hunger (2018). Regrettably, though, while crosscuts between the voyages add tension and a kaleidoscopic narrative adds color and depth, the book ultimately founders beneath the weight of glacial pacing, paltry plotting, and sketchily conceived paranormal elements.

THE HUNGER
by Alma Katsu
Fiction