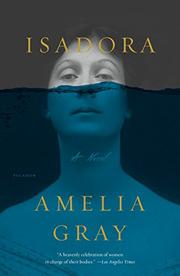 Captivating historical fiction from the award-winning author of Threats (2012) and Museum of the Weird (2010).

As the “mother of modern dance,” Isadora Duncan pioneered a style of movement that released the body from the rigid discipline of ballet. Her choreography favored free-flowing movements designed to seem more like spontaneous expression than a practiced performance. At first, the feverish, practically Gothic voice that Gray invents for her protagonist seems an odd fit for a woman inspired by the simple lines and unadorned grace of classical art and architecture, but, as the reader goes deeper into Isadora’s world, Gray’s choice begins to make perfect sense. Duncan’s modernism included the concept of the artist as rogue and celebrity—someone whose creativity demanded freedom from everyday norms. And, certainly, fate played a role in making Duncan extraordinary in life and in death. This novel begins when the dancer’s two small children drown in the Seine, and early chapters depict Duncan’s immediate reaction to this awful tragedy. To say that she is not restrained in her grieving would be a dramatic understatement, but it soon becomes clear that restraint simply is not part of her makeup. Gray’s prose is over-the-top but utterly apt. Isadora’s words are gorgeous even when they are grisly, and Gray does a terrific job of depicting not just the bereavement of a mother, but also the bereavement of a mother for whom life is a source of fuel for art. Gray also makes the canny choice to include other narrators, observers whose cooler viewpoints are expressed in the third person. Paris Singer, heir to his father’s sewing-machine fortune and the father of her son, is the one who takes care of quotidian details while Isadora pursues her muse. And her sister, Elizabeth, is also an excellent foil. As the administrator of the schools founded by the dancer, Elizabeth depends upon Isadora. But, more than anyone, Elizabeth recognizes the performative aspect of Isadora’s everyday existence. Together, these interwoven voices tell the story of a singular genius at one of the turning points of history, the moment when the promises of modernism give way to the first total war.

A novel equal to its larger-than-life protagonist.

If you know anything about Isadora Duncan, it is likely you know this: she was a modern dancer—not just any modern dancer, but the mother of modern dance—and she died, spectacularly, when her silk scarf (hand painted) caught in the wheel of an open automobile.

A VIEW OF THE EMPIRE AT SUNSET
by Caryl Phillips
Fiction