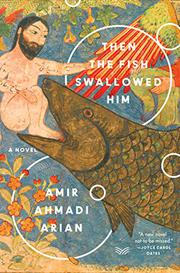 THEN THE FISH SWALLOWED HIM

A Tehran bus driver is arrested during a strike, making him a pawn of Iranian politics and a victim of cruel imprisonment.

Yunus, the narrator of this brisk and piercing protest novel, is a demure middle-aged man who’s striven to keep the turmoil of Iranian politics at arm’s length: The 1979 revolution was overshadowed by his father’s death and his mother’s ensuing depression and maybe suicide. So he's blithely confident his participation in a 2005 drivers’ strike can only be perceived as a reasonable plea for better treatment, not part of a global insurrection against the Ahmadinejad regime. What’s the harm of reading Foucault and Marx with fellow union members? Plenty, the regime believes, and after Yunus beats a young counterprotester in a fit of anger, he’s arrested, sent to Tehran’s fearsome Evin prison, and told his victim was the son of the transportation minister. Whether the allegation is true or not, Yunus’ prison stint becomes an unjust torment of beatings, forced confessions, and the slow-creeping madness of solitary confinement. (In one well-turned, poignant scene, he pleads with a fly not to abandon him.) This novel, the first in English by the Iranian-born Arian, is scaffolded with familiar tropes of kangaroo courts, false statements, and good-cop, bad-cop routines. But the author writes about Yunus’ plight with a plainspoken, lacerating intensity. Moreover, Yunus is a richly imagined character who reckons with the consequences of his political ignorance and an ill-advised affair that’s used as further ammunition against him. A few books and some bad judgment do not an enemy of the state make, but Arian expertly tracks Yunus’ gears’ turning from anger to depression to self-judging. Yunus’ mental disorientation is as punishing as his beatings and, as the closing pages show, leaves lasting harm.

A distressing, smartly interior tale of the horrors sown by oppressive politics.