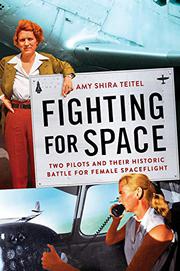 Spaceflight historian Teitel (Breaking the Chains of Gravity: The Story of Spaceflight Before NASA, 2016), who was an embedded journalist with the New Horizons mission to Pluto team in 2015, brings considerable excitement and knowledge about U.S. space programs to her close look at the life and career of two pioneering women pilots: Jackie Cochran (1906-1980) and Jerrie Cobb (1931-2019). At the start of her career, Cochran fought to be taken seriously, facing down men who tried to discourage her. The winner of multiple awards for her flying prowess, she was the only female entrant in the 1937 Bendix race, which added “a new women’s cross-country speed record” to her accomplishments. In 1938, she was named “First Lady of the Air Lanes.” At the start of World War II, she established the Women’s Flying Training Detachment, a precursor to the Women Airforce Service Pilots program, instituted at 120 Air Force bases, where women pilots tested planes, flew simulated operations, and flew cargo, weapons, and personnel around the country. Cochran directed the WASP program and flew bomber planes during the war. She also became a war correspondent for a magazine that her wealthy and doting husband bought to facilitate her overseas assignments. In 1956, Cochran lost a congressional bid, but she used her celebrity and money to support women’s training as aviators. Cobb, a generation younger, confronted the same prejudice against women pilots that Cochran faced. A NASA administrator who opposed a female astronaut program once described himself as “one of the old school” in favor of keeping women “barefoot and pregnant.” Nevertheless, Cobb proved as ardent as Cochran, submitting herself as a test subject for astronaut training, recruiting other women pilots, and lobbying with NASA director James Webb to admit women as astronauts. Cobb faced opposition not only from NASA, but also from Cochran, who adamantly opposed women’s astronaut training; wielding her high-level political connections (Lyndon Johnson was a friend), she saw Cobb’s efforts quashed.

A well-researched contribution to women’s and aviation history.