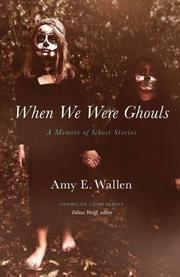 WHEN WE WERE GHOULS

A peripatetic childhood is marked by resentment and loneliness.

Because her father worked for a petroleum company, Wallen (Moon Pies and Movie Stars, 2006) moved with her family from Nevada to Nigeria, Peru, and Bolivia, each time suffering “giant, seismic shifts in cultures” that led to a fear of emotional attachments and inevitable loss. In her first nonfiction book, the author creates a candid but uneven rendering of her childhood experiences, probing family stories in an effort to discover reality. One experience, which mystifies Wallen, occurred in Peru, where she remembers that her family looted an ancient gravesite for artifacts, with which they decorated their home. Asking her parents, now in their 80s, for verification, her mother admits that they had been grave robbers but insists that she “had no idea” that what they were doing was illegal, if not immoral. “We were ghouls,” Wallen’s mother realizes now. “Hideous people.” But apart from that event, the family hardly seems ghoulish or hideous, although they were sometimes clueless about young Amy’s needs. Unfortunately, family members and friends come across as one-dimensional figures or, worse, stereotypes—e.g., the buxom, warmhearted African nanny, the diffident house steward. Wallen’s two older siblings, sent to boarding school in Switzerland, and her father, usually out in the field, are lightly sketched. Her mother, “nervous and harried,” emerges as brittle, impatient, and highly demanding. Wallen’s longing for her love is a recurring theme. “I had a talent for disappointing her,” she writes. The author sees unearthing a dead body as analogous to the perilous project of digging up shards of the past. “Every time you remember,” she writes, “you rewrite” and reimagine. “The more often you tell the memory, the more it becomes about you, and the less it becomes about what actually happened.” But her self-portrait undermines her project of discovering family history: as she tries to capture her childish perspective, she too often comes across as whiny rather than emotionally vulnerable.

LEAVING BEFORE THE RAINS COME
by Alexandra Fuller
Nonfiction

IN ROOMS OF MEMORY
by Hilary Masters
Nonfiction

DISTURBED IN THEIR NESTS
by Alephonsion Deng
Newsletter sign-up