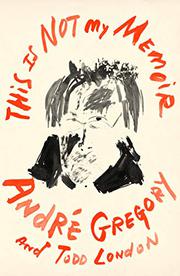 THIS IS NOT MY MEMOIR

Reminiscences by one of the pioneers of American avant-garde theater.

Few artists’ lives have been as colorful as that of Gregory. Born in Paris in 1934 to Russian Jewish parents, he lived a privileged life of “private clubs, private schools, debutante balls” once the family left wartime Europe for New York. They spent summers in a California house Thomas Mann rented to them, where they socialized with celebrities like Errol Flynn, with whom his mother had an affair. He discovered a passion for acting when he attended a New York private school “established to train repressed, polite, withdrawn little WASPs.” Much of this book, co-written by London (An Ideal Theater: Founding Visions for a New American Art, 2013, etc.), is a series of vignettes, some more entertaining than others, about Gregory’s artistic and spiritual journey: stage manager jobs at regional theaters, lessons at Lee Strasberg’s Actors Studio, pilgrimages to ashrams in India, and outrageous flourishes in the plays he directed, such as a production of Max Frisch’s Firebugs that featured an actual fire engine onstage and scenes from Hiroshima projected onto a trampoline—a gig that got him fired. The narrative is filled with anecdotes about such luminaries as fellow director Jerzy Grotowski, who had a profound influence on Gregory’s work, and Gregory Peck, who “slugged” him during an argument during the filming of Tartuffe. The highlight for many readers will likely be details of his long collaboration—“forty-five years and only one fight”—with Wallace Shawn and the making of their art-house hit My Dinner With André. These sections chronicle the duo’s struggles to make the picture, from Gregory’s memorizing hundreds of pages of dialogue for “the longest speaking role in the history of film” to his wearing long johns during the shoot because they couldn’t afford to heat the hotel where the restaurant scenes were staged.

A witty trip through a unique life in the theater.