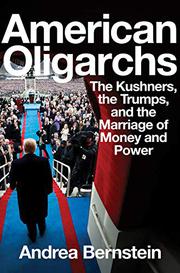 The Kushners, the Trumps, and the Marriage of Money and Power
by Andrea Bernstein
BUY NOW FROM
AMAZON
BARNES & NOBLE
LOCAL BOOKSELLER
GET WEEKLY BOOK RECOMMENDATIONS:

A wide-ranging exposé of “the crashing of norms and laws and the mixing of family and business that is the Trump administration.”

Unlike many other mainstream journalists, Peabody-winning Trump, Inc. podcast host Bernstein, who has been digging into the Trump and Kushner family businesses for years, never hesitates to label Donald Trump a liar, a perjurer, and a felon who has escaped imprisonment for his numerous business crimes. (The author pays little attention to the multiple accusations against Trump as a serial sexual assaulter, which have been reported in depth elsewhere.) Bernstein documents how much of her scathing critique of the current president also applies to Trump’s father, his two adult sons, and his daughter, Ivanka, who linked the Trumps to the Kushner clan through her 2009 marriage to Jared Kushner. According to Bernstein’s carefully documented research, Jared has morphed from a mostly upright, nonpolitical New Jersey real estate developer into a right-wing tyrant and congenital liar. Already well known before this book was the criminal conviction of Jared Kushner’s father for business fraud, but Bernstein provides useful added detail regarding the Kushners’ many misdeeds. She also sticks to the facts and avoids partisan politics: After all, for most of their lives, members of the Trump and Kushner clans identified more as Democrats than Republicans, though they gave campaign contributions to politicians of all ideologies while trying to buy influence that would benefit their real estate empires. Of all the characters Bernstein exposes in this necessarily hard-hitting book, Ivanka is the only one who comes across as willing to rise to power through honest work rather than just her family name. The author, who conducted hundreds of interviews and read more than 100,000 documents to create this damning portrait of two clearly unscrupulous families, credits investigative journalists before her, especially Wayne Barrett, whose 1992 Trump biography exposed his decades of nefarious business and personal dealings.

A painstaking documentation of a relentless culture of corruption.