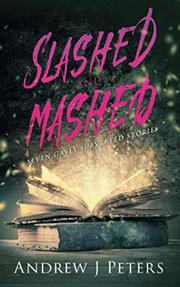 A set of seven familiar folktales, retold with gay characters.

In Peters’ (Irresistible, 2018, etc.) anthology of what he calls “gayly subverted” tales, readers encounter gay protagonists in folkloric settings. In “Theseus and the Minotaur,” for instance, the Greek mythological hero Theseus winds his way to the center of the Labyrinth only to find a half man/half bull with a heartbreaking life story who isn’t the monster that many people claim him to be. In the story of “Károly, Who Kept a Secret,” a boy must hide the fact that his sword sings to him, even if it turns people that he loves against him. Fumihiro and Aito, in “The Peach Boy,” encounter a giant peach with a baby inside it, and Adalbert must overcome his own selfish ways in “The Vain Prince.” In “The Jaguar of the Backward Glance,” René encounters an unknown tribe in the jungle while on an expedition, and its shaman informs him of a curse on René’s ex-lover. An Egyptian merchant living in New York City encounters a jinn in “Ma’aruf the Street Vendor”; the man wishes for a new life elsewhere, but trouble finds him there, as well, In the final tale, “A Rabbit Grows in Brooklyn,” Ramon meets a strange man named “Rabbit” who seduces him and disappears, leaving him with nothing. Peters offers versions of seven classic tales that all receive his own unique spin, which often involves playing with his audience’s expectations regarding happy endings. Not every story ends happily; however, all of them feature love between two men. The collection’s title suggests a passionate romantic romp, but the author takes a relatively low-key, literary approach to his tales. His prose is clear and fluid, which gives the stories the traditional air of their original inspirations; as a result, aficionados of all kinds of folktales may be interested in putting this book on their shelves.

An offbeat collection of well-told stories with LGBTQ themes.