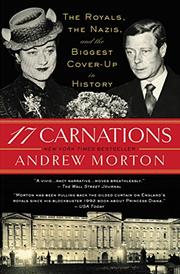 The Royals, the Nazis and the Biggest Cover-Up in History
by Andrew Morton
BUY NOW FROM
AMAZON
BARNES & NOBLE
LOCAL BOOKSELLER
GET WEEKLY BOOK RECOMMENDATIONS:

Morton (William & Catherine: Their Story, 2011, etc.) takes a break from his unauthorized biographies of the rich and famous to dig into the archives regarding the incompetent King Edward VIII and his American wife, Wallis Simpson.

The story is well-known: The Prince of Wales fell for a twice-married lady from Baltimore and eventually abdicated his throne for her. Edward was effectively banished by the new king, George VI, to avoid comparisons to his much more charismatic brother, and made the Duke of Windsor. This story is really about Edward and Simpson’s close ties to the Nazis, including a visit with Hitler. While still in England, Joachim von Ribbentrop, Hitler’s special deputy who was mad for Wallis, became a fixture in their set. He convinced the king of Germany’s good intentions, strengthening Edward’s support of Hitler’s economic success. But Edward overstepped his position as king when he interfered in foreign relations, attempting to forestall war. The meat of the book doesn’t arrive until halfway through, during the duke’s stay in Spain and Portugal in 1940 on the way to his gubernatorial term in the Bahamas. Under Operation Willi, Germany planned to install Edward as a puppet dictator after England’s defeat, which nearly occurred as the British were evacuating Dunkirk. Edward was surely aware of the plan. He was indiscreet, irresponsible, defeatist, childish and naïve. Days before the end of the war, copies of communications among the Germans, Spanish and the Windsors were discovered in the Russian zone and quickly spirited away by the British. This evidence of his clear knowledge of the plan would have done irreparable damage to the British monarchy.

Morton insists that Edward never really wanted to be king and implies that Simpson never wanted to marry him. A better book would begin in Spain and focus on the damning papers, saving readers all the silly bits and innuendo of Simpson’s affairs.

THAT WOMAN
by Anne Sebba
Nonfiction