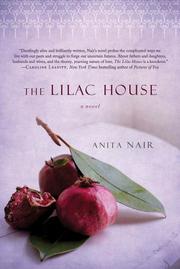 Meera’s husband, Giri, fell in love after spying her in the yard of her family home, the Lilac House. After marriage, the couple lived there with their two children and Meera’s mother and grandmother. As of late, Giri has been pressuring Meera to sell the house, but she refuses and won’t tell him why the house cannot be sold. Meanwhile, Jak, a professor who has been living in the United States, is back in India to determine how his beloved oldest daughter, a university student, was injured. Smriti, bedridden and unable to communicate, must be cared for around the clock. All Jak and his wife know about Smriti’s actions prior to her being injured is that she was in an “accident.” He travels to see the place where it happened, hoping to obtain answers from her friends, the police and the doctor at the hospital where she was brought, but no one will talk to him. Jak and Meera meet at a wine launch where Meera, a successful cookbook author, and Giri appear for the last time as a couple. Before the party ends, Giri abandons her and their son, running off to another life without them. Forced to find work in order to support her family, Meera takes a position working as Jak’s assistant, but not before realizing that he is the man who gave her a ride home from the party where her husband dumped her. Frantic about money and unsure of herself, Meera struggles with her change of fortune while Jak faces a future with a child who will never again regain her functionality. Even worse, he can’t seem to resolve the mystery of how she ended up so damaged. Nair tells the story of these two wounded birds through melodramatic prose that grows more plodding with each page.

Nair’s story may appeal to readers who enjoy novels set in India, but most will want to pass on this overwritten tale.

THE BETTER MAN
by Anita Nair

CHILDREN OF THE JACARANDA TREE
by Sahar Delijani
Fiction

THE MOUNTAIN OF LIGHT
by Indu Sundaresan
Newsletter sign-up