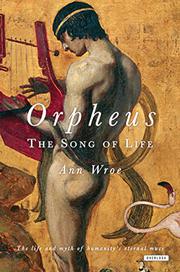 Economist briefings and obituaries editor Wroe (Being Shelley: The Poet’s Search for Himself, 2007, etc.) delivers a transformative adventure of myth.

The story of the semi-god Orpheus, the young man with a lyre, has been told and retold across the ages. His music enchanted the trees, calmed the seas and gave birth to light, life and love. According to poet Rainer Maria Rilke, Orpheus taught his followers to “become what you are.” Wroe’s melodic style breathes new life into his adventures with Jason and the Argonauts, his eternal love of Eurydice and interminable mourning for her and descent into Hades. Orpheus appears in some guise in a wide variety of cultures across centuries—e.g., as a Thracian king, Sir Orfeo in Breton and Irish stories or his invocation on a fifth-century BCE sacrificial token from Olbia on the Black Sea. Even with all that, however, he was not a true god, but only halfway divine; as Horace wrote, “the gods’ interpreter.” As Wroe writes, “godhead gradually slipped away from him, leaving only a sense of election and the power, through his music, to change landscapes, seasons, hearts.” In her tuneful prose, the author recounts the influence of Orpheus on a veritable pantheon of writers and musicians, including Ovid, Virgil, Milton, Shelley, Keats, Cocteau and a host of others. Wroe brings mythology and Orpheus so vividly to life that readers may be convinced that he actually did exist and, indeed, still does. The author ends as she began, with Rilke at work, contemplating the magic of Orpheus: “Beyond the windows, over the hills, fresh clouds were streaming and shape-shifting as fast as the toiling, teeming world. But Orpheus’s song rang higher and holier, eternally.”

A book to make readers laugh, sing and weep.

BEING SHELLEY
by Ann Wroe
Nonfiction

A FOOL AND HIS MONEY
by Ann Wroe

THE JOY OF SEXUS
by Vicki León
Children

THE LYRE OF ORPHEUS
by Robertson Davies
Children