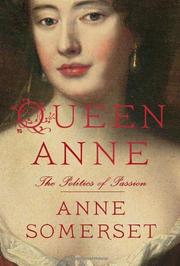 Somerset (The Affair of the Poisons: Murder, Infanticide and Satanism at the Court of Louis XIV, 2004) delivers an exhaustive and easily readable history of a queen trying to emulate Elizabeth I with none of the Tudor forcefulness and too much of the Stuart feebleness.

The much-maligned Queen Anne (1665–1714) was never expected to reign. Her father, James II, was overthrown in the Glorious Revolution of 1688 and succeeded by his daughter, the childless Mary, and her husband, William of Orange. Anne’s 17 pregnancies before her accession produced only one child, who survived only to age 11. Her devotion to her friend and First Lady of the Bedchamber, Sarah Churchill, was a most unfortunate liaison. Sarah treated Anne as an uninformed fool, unable to form opinions of her own. However, Anne blossomed when she became queen, a situation that Sarah never accepted. Sarah’s husband, the Duke of Marlborough, and Lord Treasurer Sidney Godolphin, were Anne’s primary ministers; many thought they completely controlled her. Anne’s correspondence shows just how malicious and even criminal Sarah was. Her dictatorial domination is evident in her demands, harangues and diatribes. Even Marlborough phrased his letters to the queen based on instructions from his wife and Godolphin. They viciously abused Anne’s rejection of their politics while encouraging the future George I to invade England after they fell from favor. Today’s reader will easily recognize the rancorous party politics, obstructionism and inability to enact laws that existed in that period.

Anne’s natural reserve and her instinct for discretion has led historians to believe that she was weak and dominated by women of stronger character. Somerset’s impressive scholarship debunks that belief and shows Anne as a masterful, even authoritative, queen who survived the influence of her “friends.”

THE AFFAIR OF THE POISONS
by Anne Somerset
Nonfiction

ELIZABETH I
by Anne Somerset

A WANT OF KINDNESS
by Joanne Limburg
Nonfiction