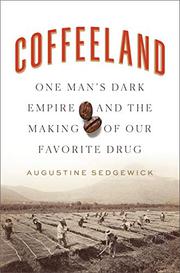 One Man's Dark Empire and the Making of Our Favorite Drug
by Augustine Sedgewick
BUY NOW FROM
AMAZON
BARNES & NOBLE
LOCAL BOOKSELLER
GET WEEKLY BOOK RECOMMENDATIONS:

A broad-ranging, often surprising study of the economics and political ecology of coffee.

Drawing alongside such studies as Stanley Mintz’s Sweetness and Power and Tom Standage’s A History of the World in Six Glasses, Sedgewick, a professor of history and American studies, debuts with an examination of the intersection of people from different parts of the world in forging an extractive colonial economy. One was a Brazilian immigrant to El Salvador who arrived in the mid-1800s and set to work nudging the agricultural economy away from indigo and toward coffee. That deal was sealed with the arrival, decades later, of another immigrant, this one from England. James Hill, writes the author, oversaw the conversion of that agricultural economy to the monocultural production of coffee, with coffee plantations that eventually took up a huge percentage of the country’s arable land. All of this was done in concert with American markets, with the timing just right for the arrival of immigrants to the U.S. who came from coffee-drinking Mediterranean societies. It also appealed to a change of tastes that, in its day, had children both drinking and growing the stuff, with Danish immigrant Jacob Riis observing in New York “men and boys of all ages crowded around one-cent coffee stalls on the street.” Sedgewick casts a wide net in his capably written book, observing, for instance, that liberals in newly independent El Salvador had once made advances to the U.S. to be incorporated as a state. Moreover, he links the rise of the coffee monoculture to the development of an enriched ruling class in that country but also an immiseration of the peasantry: “The transformation of the volcanic highlands into a coffee monoculture transformed the diet of El Salvador’s working people into a flat, featureless landscape of tortillas and beans.” Meanwhile, workers in the U.S. became so dependent on coffee, and so powerful in times of labor shortage, that the coffee break was enshrined in the nation’s culture and remains so today.

An intriguing account that darkens the depths of that daily cup of joe.