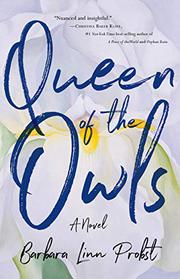 QUEEN OF THE OWLS

A frustrated wife tries to get her groove back with the help of a sexy photographer and inspiration from the artist Georgia O’Keeffe in this debut novel.

At the age of 34, with two preschool kids, Elizabeth Crawford finds herself going crazy in a passionless marriage to her husband, Ben, whose lack of desire for her leaves her feeling “unloved and unbeautiful.” She’s also hit a roadblock in her Ph.D. dissertation on 20th-century painter O’Keeffe, struggling to figure out how a sojourn in Hawaii provoked the artist to switch from creating lush flowers to producing pictures of cow skulls in the desert. Assistance on both problems materializes in the form of Richard Ferris, a handsome photographer who turns his smoldering gaze on Elizabeth in their tai chi class. Richard is fascinated by her O’Keeffe theories and proposes a daring way for her to connect more deeply with the painter’s psyche: pose nude for him to re-create a famous series of photographs taken of the artist in the 1920s by her lover, the photographer Alfred Stieglitz. During the photo sessions, Elizabeth progresses from severe bashfulness at loosening a few buttons to ebullience as more clothing comes off. She feels “her skin tingling, alert and alive,” while the heightening sexual tension with Richard renders her “dizzy, weak with the desire that flooded her body.” Her walk on the wild side leads to more exposure than she bargained for and eventually forces her to reconsider her attitudes toward Richard, her marriage, O’Keeffe, and herself. The art history musings in Probst’s yearning tale of renewal—“Her core’s still there, her female essence, but it isn’t accessible, not like it is in the flower paintings she did earlier”—often feel murky and uninvolving. Fortunately, the author paints a vivid and absorbing portrait of domestic life—she’s a superb observer of children’s moods and antics—in an unhappy marriage that limps along on deadening routine and sedated feelings. (After a perfunctory coupling with Ben, Elizabeth “knew they’d had sex the same way she knew that the rent was due or that she needed to move a load of laundry from the washer to the dryer.”) Readers will root for Elizabeth—and wince in amusement at her pratfalls—as she strikes out in improbable new directions.

THE DISSEMBLERS
by Liza Campbell
Nonfiction