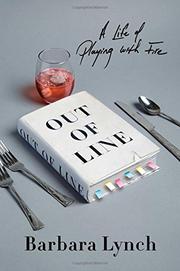 A Life of Playing with Fire
by Barbara Lynch
BUY NOW FROM
AMAZON
GET WEEKLY BOOK RECOMMENDATIONS:

A celebrated Boston-area chef rehearses her rugged Southie background, her rise into the ranks of the elite restaurateurs, and her various personal doings and demons.

Lynch, who has won multiple James Beard awards and published an award-winning cookbook, Stir: Mixing it up in the Italian Tradition (2009), now operates seven restaurants in the Boston area. In her debut memoir, she begins with her Southie girlhood, where things could have gone very wrong. Her father died early, “of alcoholism, the Irish scourge,” and she grew up in a neighborhood where she shoplifted, swindled, once dodged bullets with Whitey Bulger, stole a city bus and, later, a cab for joy rides, broke both legs in a careless street stunt, endured a sexual horror better left to her description, and dropped out of high school. It was not an auspicious beginning, but Lynch had a talent with food and a fierce determination and an equally fierce work ethic; soon she was moving upward in the culinary ranks. The author expresses justifiable pride in these accomplishments—a pride that rarely drifts into self-celebration—and writes almost breathlessly about her encounters with Julia Child, about cooking for some celebrities, and about her other heroes and mentors in the profession. Lynch is proud of maintaining her Southie roots; she has never lived very far away. She also writes frankly about her personal life. She married a much older man, had a daughter (whom she didn’t see as much as she would have liked due to work responsibilities), had an epiphany about her sexuality, went into counseling for alcohol abuse, and had a near-death experience in surgery. Whenever she writes about food, her passion is evident, and she appends a number of recipes that will surely send some readers straight to the kitchen.

A rugged tale of a self-made woman in a high-stress profession.

THE SEASONING OF A CHEF
by Doug Psaltis
Nonfiction

THE HUNGER
by John DeLucie
Nonfiction