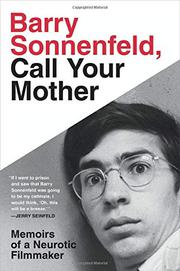 The director of The Addams Family and Men in Black tells all.

Sonnenfeld makes his debut as a memoirist with a brisk, funny recounting of his improbable rise to fame in the movie world. With a brief interlude as a cameraman for porn films—an experience he recalls in visceral detail—Sonnenfeld carved out a successful career as a cinematographer (Blood Simple, Raising Arizona), director of photography (Big, When Harry Met Sally), and movie and TV director (Addams Family Values, Get Shorty, and Pushing Daisies). The only child of a neurotic, manipulative mother who “had a very fluid relationship with the truth” and a philandering father, the young Barry was sexually abused by his mother’s first cousin, who lived with the family for a while. When Sonnenfeld confronted his parents about the abuse, they responded coolly: “don’t forget child molestation didn’t have the same stigma back then that it has now.” His mother smothered him with her fears, threatening to kill herself if he opted to go to a residential college, but she also encouraged him to go to film school when she saw that his career as a photographer was not taking off. Although his parents reneged on their offer to pay tuition—“Don’t be ridiculous. I would never say such a thing,” his mother exclaimed after he enrolled—NYU’s film school launched him into cinematography. Sonnenfeld offers a behind-the-scenes look at the many directors, producers, and actors with whom he worked. The Coen brothers, he writes, were “total novices” when they started filming Blood Simple, a low-budget movie that brought Sonnenfeld to the attention of Penny Marshall, who needed a cinematographer for Big. Sonnenfeld came to like Marshall despite her legendary indecisiveness and negativity; she balked at Sonnenfeld’s visual style and even Tom Hanks’ acting. The author was in the midst of filming When Harry Met Sally when volatile, unpredictable Scott Rudin summoned him to direct The Addams Family—after several other directors turned Rudin down.

Zesty anecdotes about family, marriage, and fatherhood combine with Hollywood gossip to make for an entertaining romp.