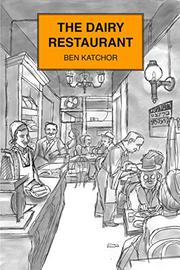 An account of once-popular New York restaurants that had a rich social and cultural history.

“Since, by choice or historical necessity, exile and travel were defining aspects of Jewish life, somewhere a Jew was always eating out,” observes cartoonist and MacArthur fellow Katchor (Illustration/Parsons, the New School; Hand-Drying in America, 2013, etc.) in his exhaustively researched, entertaining, and profusely illustrated history of Jewish dining preferences and practices. The Garden of Eden, he notes wryly, was “the first private eating place open to the public,” serving as a model for all the restaurants that came after: cafes, cafeterias, buffets, milk halls, lunch counters, diners, delicatessens, and, especially, dairy restaurants, a favorite destination among New York Jews, which Katchor remembers from his wanderings around the city as a young adult. Dairy restaurants, because they served no meat, attracted diners who observed kosher laws; many boasted a long menu that included items such as mushroom cutlet, blintzes, broiled fish, vegetarian liver, and fried eggplant steak. Attracted by the homey appearance and “forlorn” atmosphere of these restaurants, Katchor set out to uncover their history, engaging in years of “aimless reading in the libraries of New York and on the pages of the internet,” where he found menus, memoirs, telephone directories, newspaper ads, fiction, and food histories that fill the pages of his book with colorful anecdotes, trivia, and food lore. Although dairy restaurants were popular with Jewish immigrants, their advent in the U.S. predated immigrants’ demand for Eastern European meatless dishes. The milk hall, often located in parks, resorts, or spas, gained popularity throughout 19th-century Europe. Franz Kafka, for example, treated himself to a glass of sour milk from a milk pavilion after a day in a Prague park. Jews were not alone in embracing vegetarianism. In Europe and America, shunning meat was inspired by several causes, including utopian socialism, which sought to distance itself from “the beef-eating aristocracy”; ethical preferences; and health concerns. A meatless diet relieved digestive problems, many sufferers found.

An informative, nostalgic evocation of a special urban dining experience.

THE JEW OF NEW YORK
by Ben Katchor
Newsletter sign-up