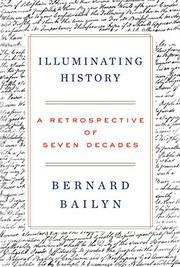 Bailyn (Emeritus, History/Harvard Univ.; Sometimes an Art: Nine Essays on History, 2015, etc.), who has won the Pulitzer Prize (twice), the National Book Award, the Bancroft Prize, and the National Humanities Medal, offers a fascinating reflection on intellectual enthusiasms and challenges that have marked his long, prolific career. In 1946, after serving in the Army, the author began graduate school with an interest in Colonial America, aiming to examine connections between America and Europe and particularly “the connections between ideas and ‘reality’ ” in the daily lives of ordinary individuals and families. Deftly melding memoir and historiography, Bailyn recounts several significant projects that were shaped by unexpected findings, “one or more obscure documents or individuals that in themselves, in some peculiar way, illuminated the greater picture.” His quest to examine the effect of the Puritans’ religious beliefs on early New England’s economy, for example, was advanced by a 48,000-word last will and testament of “an avaricious but profoundly pious tradesman” who candidly reviewed the events of his life in the context of his “self-denying but aspirational” conception of religion. In investigating family life among the early settlers, Bailyn confronted feisty controversies among scholars, fueled by contrasting analyses of demographic data, genealogies, land transfer documents, and family histories. The American Revolution occupied the author for decades, leading him to ask how widely and deeply the Founders’ ideology penetrated daily life. Researching that question, he discovered an astounding archive of 3,280 pages of newspapers annotated and indexed by a Boston shopkeeper: a rare response to the turmoil of the times. “The search for interior experiences—for sudden, unexpected signs” can never be systematic, Bailyn observes, but they inform a constant revision of the sense of the past. History, he writes, “is an imaginative construction,” like fiction, but bound by documentation. The historian must be an agile storyteller, always relying on evidence. “You can’t disprove a novel,” he writes, “but you can disprove history; and that seems to me all the difference in the world.”

A privilege for history buffs from a master of the craft.

“TO BEGIN THE WORLD ANEW”
by Bernard Bailyn
Newsletter sign-up