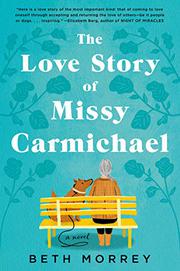 THE LOVE STORY OF MISSY CARMICHAEL

An isolated, prickly septuagenarian in London who has lost her husband works to overcome her fears that she is a burden to those around her.

Millicent Carmichael—Missy—married the man she loved, Leo, in 1959. But after a half-century of living, loving, and growing older in a huge house in Stoke Newington, London, he is gone, and she is bereft. Her son and grandson, both of whom she dotes on, live more than 9,000 miles away in Australia, and she is recently estranged from her daughter, who lives nearby in Cambridge. Missy is a difficult person with sharp edges—she knows this, her Leo knew this—and she is at loose ends, having lived in a community for all this time without getting to know anyone because she held so tightly to her family she made no time for anyone else. But now, the loneliness is crushing her. A few life-changing moments happen in quick succession: She faints in the park and meets neighbor Sylvie, who kindly sits with her for a bit; her home is robbed while she feigns sleep; and she agrees to do a favor for brusque neighbor Angela—journalist, friend of Sylvie, and single mother to Otis. And so Missy finds herself tending to a vivacious dog of indeterminate breed, Bob, that she neither wanted nor feels capable of taking care of. Debut author Morrey has deftly created a series of love stories, interwoven together and told in snippets through time: Missy’s undying devotion to Leo, despite his—and her—many flaws; her devotion to her children, which she often isn’t able to verbalize; and her growing niche in the community that Bob—her Bobby, her unexpected companion and confidant—introduces her to during their daily walks. There are no saccharine moments to mar this tale.

Pain, grief, and hurt are all part of life in this moving portrayal of the many forms love can take.