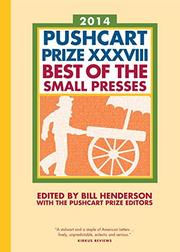 The venerable literary annual turns 38, with no signs of slowing down.

The Pushcart Prize volumes, notes chief editor and publisher Henderson, is “one of the last remaining collectives from the 60’s and 70’s,” its crew numbering more than 200 contributing editors (along with guest editors, who this year include the poets Arthur Sze and Patricia Smith). As Henderson also notes, the present collection contains 68 selections, with a table of contents that reads like a well-stocked, if academic, literary conference, featuring the likes of Pam Houston, Amy Hempel, David St. John, Lorrie Moore and Louise Glück. All turn in good work; we would be surprised if it were less than competent, and in any event, none of the pros seem to be breaking a sweat. The surprises, and the best pieces here, are from relative newcomers—save for the best piece in the book, period, which is a nicely savage poem by the 15th-century rapscallion François Villon, translated by Richard Wilbur. Never mind the lame opener (“Not Lauryn Hill, the singer who did that song ‘Killing Me Softly,’ but another Lauren Hill”); most of the newcomer pieces here are topical, well-crafted and often quite funny, some standouts being Steve Adams’ memoir of bodywork and platonic love (“Like a first best friend, a first kiss, a first pet, I would never feel this kind of intimacy again”); Eric Fair’s harrowing post–Abu Ghraib essay “Consequence”; and Sarah Frisch’s lively, long and ultimately strange story “Housebreaking.”

Of a piece with previous Pushcart collections, all 37 of them, and a revealing picture of the state of the art in modern American letters.

THE ART OF FICTION
by John Gardner
Fiction

ON WRITING
by Stephen King
Fiction