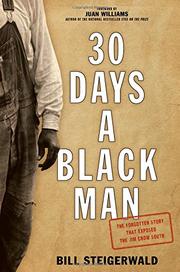 Longtime journalist Steigerwald (Dogging Steinbeck: Discovering America and Exposing the Truth about Travels with Charley, 2012, etc.) offers a valuable corrective in resurrecting Ray Sprigle (1886-1957), an old-school white Pittsburgh newspaperman who produced an exposé after traveling the South disguised as a black man. As Juan Williams notes in his foreword, “over thirty days, Sprigle learned of the daily humiliations experienced by blacks in the 1948 Deep South.” Before he details Sprigle’s tense journey, Steigerwald strongly depicts the pre–civil rights landscape, arguing that most white Americans could ignore blacks’ plight, and some enforced the color line. He focuses on once-prominent figures, including the NAACP’s driven head Walter Francis White (who actually appeared white), so-called “progressive segregationists” like journalist Hodding Carter, and determined middle-class blacks like John Wesley Dobbs, a Masonic Grand Master (and passionate Atlanta booster despite its segregation) recruited by White to guide Sprigle. He portrays Atlanta and Pittsburgh as cities in their primes, vastly different for black and white citizens, as was the country overall in 1948: “Civil rights and desegregation were in the headlines every day.” Sprigle, who won a Pulitzer Prize for exposing the Ku Klux Klan associations of Supreme Court justice Hugo Black, was described by Time as “a hard-digging, hell-for-leather newsman.” Passing as a black man with a deep suntan and workman’s clothes, after learning that dyes would be toxic, Sprigle traveled through several states, from Atlanta to the Mississippi Delta, and avoided danger due to Dobbs’ counsel: “to stay out of trouble and avoid harm you had to be vigilant as well as meek, lowly, and docile. His newspaper stories were carried nationwide and turned into a book, yet Steigerwald concludes, “by Christmas of 1948, the intense debate over the future of Jim Crow segregation had burned out in the national media.”

Sprigle’s audacity was forgotten, but Steigerwald turns it into rollicking, haunting American history.

THE ASSASSINATION OF FRED HAMPTON
by Jeffrey Haas
Nonfiction

THE BURGLARY
by Betty Medsger
Nonfiction

SUMMONED AT MIDNIGHT
by Richard A. Serrano
Newsletter sign-up