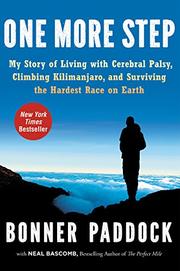 The story of one man's ability to rise above his physical disability to achieve his dreams.

When Paddock was born, the umbilical cord was wrapped around his neck, cutting off vital oxygen to his brain, leaving him with a strange gait and uncoordinated limbs. However, the author didn't let his extreme clumsiness slow him down, as he was determined to keep up with his two older brothers, despite the numerous broken bones he received while trying. Even after being diagnosed with cerebral palsy at 11, Paddock continued to push himself physically, a trait that continued into adulthood. After running a half-marathon to raise money and awareness for cerebral palsy, the author’s life changed radically, and he became determined to show the world that people with this condition could do as much or more than anyone else. With a couple of marathons under his belt, Paddock tackled Mount Kilimanjaro, which became as much a battle with his inner emotions as with the mountain itself. The author’s prose, aided by Bascomb (The Nazi Hunters: How a Team of Spies and Survivors Captured the World's Most Notorious Nazi, 2013, etc.), places readers on the mountainside with him, enduring the endless cold, wind and altitude sickness as he pushed himself to reach the summit. "Somewhere—the hundredth switchback, the thousandth—the pain in my legs blew past anything I had ever known,” writes the author. “With each step my feet and ankles sent shockwaves of agony. I wanted to cry, to sit down on a rock and weep, but that would mean giving in to the pain.” But Paddock went even further and entered the Kona Triathlon, one of the hardest physical endurance races in existence. His story of training for these events and the mind-boggling pain he endured to achieve his goals will have readers crying and cheering all the way to the finish line.

An emotion- and action-packed story of the author’s tenacious, dogged pursuit of his goals.

THE CLIMB OF MY LIFE
by Kelly Perkins
Indie

DEEP DIVE AGAINST THE ODDS
by Dorothy Myrick
Nonfiction

IF AT BIRTH YOU DON'T SUCCEED
by Zach Anner
Indie

Beyond a Charmed Life
by Barbara Huntress Tresness
Newsletter sign-up