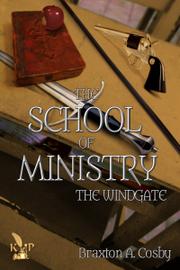 THE SCHOOL OF MINISTRY

The Windgate - Book 1
by Braxton A. Cosby
BUY NOW FROM
AMAZON
GET WEEKLY BOOK RECOMMENDATIONS:

A fast-paced adventure featuring a secret society on a divine mission.

This debut action yarn offers the usual array of clever gadgets and military hierarchy along with its Christian message. The titular school was established by an early follower of Jesus to help protect the innocent from the menaces of Satan, and the novel details the training and first battle experiences of three new recruits to the secret society of The Way. Each is endowed with a particular spiritual “gift,” that he or she must learn to use for the benefit of humanity. (One recruit, for example, has “a talent for discerning the truth.”) As the trainees learn to work together as a team, they confront enemies with sinister designs on the future of the world. The main characters have the feel of archetypes—the protagonist, Ziv, is an orphan driven by vengeance, and his comrades are a reformed “bad boy” and a spiritually dedicated millionaire. (The work features other common types as well, including a wise mentor, his plucky assistant and a battle-hardened trainer.) Cosby’s choice to endow his heroes with religious purpose deepens the narrative, but he never sacrifices the action in favor of his message. As a whole, the book is a satisfying read: The characters steadily develop, goodness prevails, and there’s even a touch of romantic intrigue. Cosby’s prose style, though occasionally strained, is often reminiscent of a graphic novel in prose; his descriptions of training and battle, in particular, are likely to evoke clear pictures in readers’ minds. His storytelling is sound, and his integration of Christian ethics and teachings is admirably natural, never reading like a sermon. Cosby’s work also showcases women as competent, valuable participants. The work will appeal most strongly to Christian readers, and parents might find it valuable to read it with their older children, as the rollicking adventure can serve as a springboard to conversations about virtue and faith. However, the sometimes-graphic violence may make it unsuitable for very young readers.

CLOAK OF DESTINY
by
Indie

IN THE VALLEY OF NINEVEH
by L. Steven Rencher
Indie