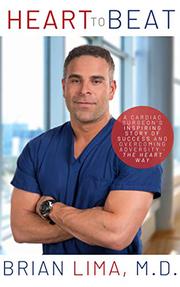 In this debut book, a cardiac surgeon recounts his successful medical career and offers a guide for readers wishing to achieve triumphs in their lives as well.

From the beginning, Lima proclaims his hope to inspire people from “all walks of life,” not simply aspiring doctors. Throughout the book, he details his personal history to reveal how he overcame obstacles. After his parents and siblings fled Cuba in the late 1960s, the author was born in Kearny, New Jersey, in 1976. At an early age, he was motivated to work harder in school after he watched a friend, also from a family of immigrants, win multiple awards at their eighth grade graduation. By high school, Lima focused on academics as well as athleticism, excelling in football. His devotion to the former was how he gained acceptance to Cornell University. He recalls that he accomplished this feat with a strong work ethic. He then stresses the importance of continuing to work hard even after finding success, citing “constant motion, growth, and development” as essentials. Another key element is gravitas, which in this book essentially means being consistently levelheaded under scrutiny or pressure. This links with later points, such as remaining ambitious in the face of self-doubts and conquering fears of failure. While much of the volume involves the figurative heart, Lima allots the final pages to the literal one, discussing the “rapidly evolving field of advanced heart failure” and providing tips on promoting a heart-healthy lifestyle.

Lima deftly blends a useful guide with an absorbing autobiography; he doesn’t concentrate excessively on either one. The hardships he faced in his own life will likely elicit readers’ sympathies, including losing both parents and his family’s initially seeing his older brother’s schizophrenia as satanic possession. Although clichés at first saturate the book (“in it to win it”; “eyes on the prize”), they gradually subside as the account progresses. The author writes in an easygoing language that doesn’t condescend to readers. He’s instead humble (asserting that his above-average intelligence is not innate but the result of persistent studying) and occasionally self-deprecating (wryly mentioning his “critically acclaimed writing”). As a result, his criticisms of social media and the current culture of “safetyism” don’t come across as contemptuous. For example, he notes that the latter may adversely affect readers’ ambitions if they are too wary of taking risks. Lima playfully incorporates the volume’s main theme of putting your heart into what you do. Chapter titles, for example, typically consist of wordplay (“For the Most Heart, Gravitas is Essential”). He even includes a “handy mnemonic” for recalling the specific points of the subtitle’s “HEART Way” (Hard work; Eager or Entrepreneurial; Aligned; Resolute; Thoughtfulness). There are instances of repetition; despite a chapter on avoiding complacency, Lima repeatedly returns to this notion throughout the book (for example, doing the “bare minimum” or “just enough”). Nevertheless, the work’s short length prevents the reiterations from becoming too conspicuous.

Helpful advice from a keen, assertive, and relatable physician.