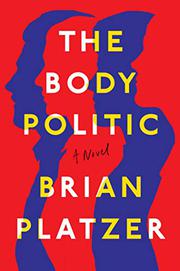 A New York couple faces medical and personal difficulties during the national malaise of the Trump years.

When we meet Tess, a Broadway understudy and mother of two, she is celebrating her 37th birthday alone in a bar. Eight months ago, shortly after she confessed to cheating on him with a fellow actor, her husband, David, fell off a long ladder at an upstate New York apple-picking orchard, and his head injuries resulted in a debilitating, long-term vestibular disorder (also suffered by the author). Once filled with so much “buoyancy and good cheer” that he would dance upon getting up in the morning, now David feels leaden and can barely function. As he writes in a journal Tess reads without permission, "Some days I think I’m lucky to be with someone who’s suffered. Seen what she’s seen and survived true depression. Other days I think I need someone less damaged, someone who can devote herself more fully to helping me.” The journal also documents David's desperate visits to alternative practitioners that ultimately do nothing but ruin the family financially. There are many more complications—too many—some having to do with Tess’ past, other with David’s best friend, Tazio (whom David nursed back to health after liver failure and whom Tess is in love with), and Tazio's fiancee, Angelica. Tazio is an art student–turned-politico, and his story arc contains, among other things, a deep dive into the John Edwards campaign and a position in the Trump administration. As he makes the rounds of the male and female characters, Platzer (Bed-Stuy Is Burning, 2017) often seems to be searching for answers himself. For example, after Tess and Angelica attempt to resolve their past traumas by pairing up for #MeToo type confrontations, the author tries to evoke Tess' state of mind with a series of questions: “Maybe…seeing your father kill your mother is something you can’t ever get over. Maybe it is worse than rape, especially if you loved your rapist.” Elsewhere: “What if Tazio is planning on killing Trump?” Fewer storylines and less topical content might have helped.

Platzer writes confidently about marriage and illness, but there's too much else going on.