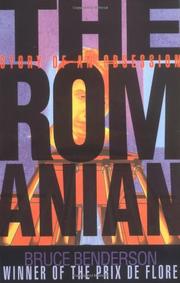 Novelist Benderson (User, 1994, etc.) lards his account of an obsessive, nine-month affair with a Romanian hustler with sentences like the following: “No one has to explain to me that the forces we depleted bourgeois intellectuals sometimes borrow for our transgressive narratives never free themselves from their unstable sources.” The author’s pseudo-boyfriend Romulus never quite shed his scam-artist attitude or gave up heterosexual flings during their relationship. Ah well, the perils of transgression. The writer first showed up in Bucharest in 1999 on a weeklong assignment for an editor who wanted a good story about brothels, “something personal and literary.” Wolfish, devilishly handsome young Romulus became almost overnight an obsession for Benderson, who immersed himself not only in a starved, priapic worship of his new beau, but in the ancient reek of Romania’s tortured past. Fortunately for the author, that history is a pretty juicy soap opera, especially the story of Carol II, last king of the pre-Fascist era, and his half-Jewish mistress Lupescu, who was turned by popular anti-Semitic legend into a Mata Hari/Cleopatra hybrid responsible for the country’s supposed degeneration. Carol’s relationship with his domineering mother Marie provides more grist for Benderson’s imagination, as he endlessly ponders the parallels between that dynamic and his own Oedipal-lite bond with an overpowering mom. For hundreds of pages, the author tries to find grand meaning in his tawdry affair, whose banality he realizes long after the reader has. Explosive descriptions of decadent Romanian cities and the Iron Curtain–wracked countryside are about all that enliven this swooning, tedious book.

Repetitive, smarmy and self-satisfied. Slumming never seemed quite so bourgeois.

REPORT ON MYSELF
by Grégoire Bouillier
Fiction