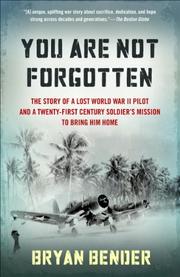 YOU ARE NOT FORGOTTEN

The Story of a Lost World War II Pilot and a Twenty-First-Century Soldier's Mission to Bring Him Home
by Bryan Bender
BUY NOW FROM
AMAZON
BARNES & NOBLE
LOCAL BOOKSELLER
GET WEEKLY BOOK RECOMMENDATIONS:

The journalist’s reporting is impressive, but the storytelling is what distinguishes this account of identifying the remains of military casualties decades after they died in war.

As national security reporter for the Boston Globe, Bender has covered recent conflicts in the Middle East and Asia. Here, the author tells the parallel stories of two young military men, separated by half a century but intertwined with the narrative momentum of a compelling mystery and the depth of character of a rich novel. Ryan McCown was a World War II Marine pilot, an archetypal Southern gentleman from Charleston, S.C. When he and others failed to return from a mission, his fate was unknown; he was presumed dead, though there was talk that he was missing or had been taken prisoner. Flash forward to the late 20th century, and McCown’s story alternates with that of George Eyster V, the only son in a family with a long military legacy but felt unsuited to follow, who preferred to exert himself as a lacrosse star and go drinking with his buddies afterward: “There were too many things about the Army he found unappealing—the rootless existence, the need to constantly follow orders and bow to authority, and, yes, the prospect of real danger. It was an honorable calling, he knew, just not for him.” The author humanizes the stories of both men, putting them in the context of their families, their romances, the novels they read and the poetry they wrote. Ultimately, Eyster resolved his ambivalence about the military through a mandate that involved using advances in forensic science to identify the remains of soldiers from battles before he was born and to bring them home. Instead of being “prepared to inflict as much damage as possible on America’s enemies,” he could help with “putting things back together again.”

Any reader who wonders about the significance of such a mission will have no reservations by the end of this well-structured, well-written book.

THANK YOU FOR YOUR SERVICE
by David Finkel
Nonfiction

THE MARINE
by James Brady
Nonfiction