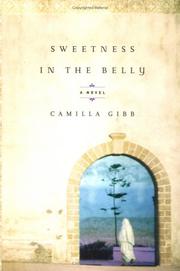 SWEETNESS IN THE BELLY

A white Muslim woman's affecting spiritual and emotional quests, as a misfit in two cultures.

Gibb (Mouthing the Words, 2001, etc.) immerses herself completely in her gravely empathetic narration of the unusual life of Lilly, daughter of hippies murdered in Morocco, leaving her orphaned, aged eight, in the care of distinguished Muslim guardians who later send her for safety to Ethiopia. Lilly's unique cross-cultural perspective is Gibb's means of access to a belief and a country rarely tackled by contemporary Western writers. Moving from the walled city of Harar in the 1970s to a run-down London borough in the ’80s, Lilly switches between differently impoverished locations where her identity is tested and modified by varying degrees of oppression and incomprehension. Hers is a story of female communities where women not only work, cook, give birth and apply makeup, but also circumcise their daughters, select husbands and fight for legitimacy. In Harar, Lilly’s white skin defines her as a farenji (foreigner), and her education in the Qur’an isolates her further, but she earns her acceptance by teaching poor children, thereby also gaining the admiration of a progressive doctor, Aziz, whom she learns to love. When famine strikes Ethiopia and the political climate shifts from relative tolerance to dictatorship, Lilly flees to England, where she will spend agonized years speculating on Aziz’s fate. In London, she not only becomes a nurse but also, with Ethiopian friend Amina, sets up an agency to re-connect refugee Ethiopians, which is how Amina rediscovers her husband Yusuf, damaged by torture and incarceration. Scarred Yusuf, increasingly Westernized Amina, grieving Lilly—now wooed by a Hindu doctor—reflect the pain, cultural relocation and uncertainty of tribal, political and religious refugees the world over. Gibb’s territory is urgently modern and controversial but she enters it softly, with grace, integrity and a lovely, compassionate story.

A poem to belief and to the displaced—humane, resonant, original, impressive.

THE BEAUTY OF HUMANITY MOVEMENT
by Camilla Gibb
Fiction

MOUTHING THE WORDS
by Camilla Gibb