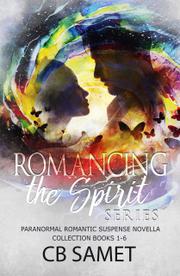 Samet (Maltisse File, 2019, etc.) brings together six tales of love between the living and the dead in this collection of supernatural romance novellas.

In the opening tale, “Sadie’s Spirit,” physician Sadie Crawford was once a skeptic who didn’t believe in ghosts—until she became one. Now, she’s trying to find her own killer, and ironically, she needs help from a psychic ex-boyfriend whom she dumped because she didn’t believe in his abilities. In “Cassie’s Chase,” Cassie Chase is a doctor who does believe in ghosts—after all, she’s known one all her life. Now she needs her ghost friend’s help in order to save her newfound love from a potential murderer. Museum curator Phoebe Montgomery, in “Phoebe’s Pharaoh,” is shocked when the spirit from one of her exhibitions—an Egyptian mummy—appears and asks her to help him reunite with the ghost of his wife. Phoebe agrees but not before hiring an attractive ex-Marine to keep her safe during her mission to Egypt. In “Autumn’s Angel,” FBI agent Autumn is on the trail of stolen art. After an obvious suspect is killed, she turns to a handsome psychic to help her solve the crime. In these and two more novellas, women engagingly contend with otherworldly entities and real-world danger while also grappling with that most mysterious of phenomena: the human heart. Samet’s prose vacillates skillfully between various registers, expressing sensuality, suspense, and humor as needed: “Phoebe screamed. She stumbled backward, bumping into the stanchion and the red rope surrounding the sarcophagus, and tumbling to the floor.…‘My apologies,’ the ghost spoke with a deep, male voice. ‘I didn’t mean to startle you. Can you please stop screaming?’ ” The premises may sometimes sound a bit silly in the abstract, but they’re all believable and compelling as the reader turns the pages. Samet manages to sell her notions with a mix of capable writing and imaginative twists on the romance format. Certain tropes reappear—doctor protagonists, unsolved crimes, buried treasure—but if readers enjoy one of these tales, they’ll likely appreciate them all.

A collection of well-executed, if slightly repetitive, tales of love and ghosts.