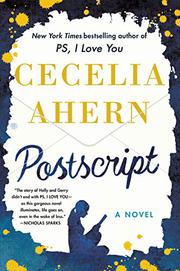 Seven years after Holly’s husband’s death, fate brings her a strange opportunity to retrace her early days of grief. But will she discover that she hasn’t moved on after all?

Ahern (Lyrebird, 2016, etc.) returns to the story of her debut novel, P.S., I Love You (which inspired a movie, as well), in which Gerry Kennedy left 10 letters for Holly to find after his death—10 letters that eased her passage out of emotional paralysis. This sequel finds Holly building a new life, working at her sister’s vintage clothing store, biking the streets of Dublin after work each night, selling the house Gerry and she bought, and sharing the story of Gerry’s letters on her sister’s podcast. She’s found love with Gabriel, a burly yet sensitive tree surgeon. They are even ready to move in together. When the podcast goes public, however, a group of terminally ill listeners asks her to teach them how to write letters to their soon-to-be-bereaved loved ones, too. As Holly struggles with whether to lead the P.S. I Love You Club, fearing that she will slip back toward her grief-stricken days, she has to confront whether she has really committed to Gabriel. But Ginika, an illiterate teen mom dying of cervical cancer, tugs hard at Holly’s heartstrings with her plea to teach her to write just one letter to her daughter, and Holly capitulates. As Holly encounters each of her newfound companions—ranging from a young man in remission to an elderly man in swift, emphysema-wracked decline—Ahern opens more doors to Holly’s lingering grief, pushing her to expand her social connections. But with Holly mentoring the writers rather than reacting to letters meant for her, Ahern’s tale pulls its emotional punch.

This well-intentioned but disappointingly sentimental sequel will delight only die-hard fans.

TIME OF MY LIFE
by Cecelia Ahern
Fiction

THE BOOK OF TOMORROW
by Cecelia Ahern
Fiction

THE GIFT
by Cecelia Ahern
Fiction

THANKS FOR THE MEMORIES
by Cecelia Ahern
Fiction