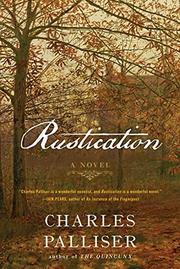 A reprobate college student stands accused of a host of moral failings in an intensely gothic tale from Palliser (The Unburied, 1999, etc.).

Richard Shenstone, author of the diary entries that make up this novel, was once his family’s great hope: With his father dead, his sister despairing of finding a rich husband and his mother despairing in general, earning a living and upholding the family’s good name has fallen to him. But when he arrives at the family’s bayside British home in December 1863, he’s in no position to help. He’s been rusticated—effectively expelled—from college for poor conduct, thanks largely to the opium habit he’s picked up. The opening pages have a pitch-dark cast: Richard’s sister, Euphemia, pounds out angry music on the piano; the roads are muddy when they’re not frozen; and every local seems to drip contempt upon the family. As Richard befogs his brain and pursues an untoward relationship with a homely maid, the plot comes into view: Somebody is sending vicious, profane letters to various townspeople threatening violence and accusing the local women of all manner of sexual indiscretions. The letters, along with Richard’s entries about his sexual adventures, are deliberately provocative, but, like most gothic literature, this is a highly moral novel: It’s about the struggle to live rightly when nature and man alike send storm clouds your way. The story turns on whether or not Richard is the author of the letters, but—odd for an epistolary novel—Palliser doesn’t go as deeply into Richard’s head as the setup and themes demand. Much time is spent elaborating on the complex web of relationships in the town, particularly Euphemia’s pursuit of a husband, which saps the emotional power of Richard’s effort to redeem himself.

THE UNBURIED
by Charles Palliser
Fiction

THE SENSATIONIST
by Charles Palliser