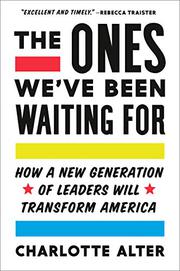 THE ONES WE'VE BEEN WAITING FOR

Time magazine correspondent Alter’s debut looks beyond the stereotypes of millennials as “entitled” and “snowflakes” in a surprising group portrait of a new generation of political leaders.

Millennial voters lean left by a 2-to-1 margin, and they are unlikely to bear out the popular wisdom that people grow more conservative as they age, the author argues, backing up her conclusion with persuasive statistics and other hard data. Decades of social science research have shown that political views are formed in early adulthood, and “once young people pick a side, they usually stay there.” So America must come to grips with millennials’ priorities—such as climate change, student debt relief, and affordable health care—and Alter aims to help by combining a wide-angle view of her generation with close-ups of young elected officials. Along with a few Republicans, she profiles Democrats including Pete Buttigieg, the presidential candidate and South Bend, Indiana, mayor; Alexandria Ocasio-Cortez, the New York congresswoman; and Braxton Winston, a Charlotte city council member and veteran of street protests who decided to change the system from within after returning from a demonstration unable to “pick up his baby daughter because his dreadlocks had so much tear gas in them.” Alter can be glib (Afghan war veteran Buttigieg wasn’t a natural for the military because he “sucked at sports” and “hated fighting”) and, when writing about millennials’ parents, patronizing and cutesy: “The boomers were defined by a sense of individualism, so when they had kids, they weren’t just any kids: the boomers’ kids must be super-duper special.” However, the author’s spirited narrative offers much solid reporting on how millennials’ views have been shaped by forces like Instagram, the Harry Potter books, and the Occupy movement. Her young politicians emerge as less entitled than enthusiastic against the odds: Whatever their differences, most succeeded not by bowing to their parties’ tribal elders but by bushwhacking trails, often driven mainly by “instinct and grit.”

A trove of facts about millennial voters and politicians that gives off a whiff of condescension to their elders.