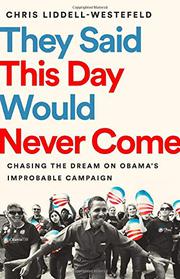 THEY SAID THIS DAY WOULD NEVER COME

Firsthand accounts of the Obama for America presidential campaign.

To oral historian Liddell-Westefeld, the impressive conviction of Barack Obama’s political campaigns was undeniable. Initially a devoted campaign volunteer, the author eventually moved on to join the Obama White House staff. Prior to leaving his five-year post with the president, Liddell-Westefeld questioned what compelled so many youth to volunteer for the 2008 campaign and what could be gleaned from its organic success for use in future nominations. The answers are embedded in the 200 interviews he conducted with alumni of the caucus effort, including former field organizers and directors, volunteers, college students, activists, speechwriters, and many others who devoted their time and energies to the success of a hopeful underdog whom the author calls “America’s most unlikely president.” In addition to Liddell-Westefeld’s personal narrative about his experiences, scores of enthusiastic volunteers and supportive politicians contribute to a readable collective chorus of hopeful voices tirelessly promoting Obama’s patriotism, moral clarity, and honorable leadership. Each member of this fellowship applauds Obama for representing what former speechwriter Jon Favreau called “something different…something outside of Washington” in a country that sorely needed it. As a campaign diary, the book succeeds in gathering representative perspectives from those who participated in its success. Through its interview snippets, the text captures the decisive moments of the journey, from the first inklings of a party nomination at “Camp Obama” through the struggle to garner supporters and up to the final moments as history was made. Kal Penn, the actor and activist, felt “simultaneously very proud of the work that we had done and very humbled by what was about to happen over the next four years.” These voices, which also include David Plouffe, Valerie Jarrett, David Axelrod, Alyssa Mastromonaco, and Obama himself, show the power of grassroots organization.

Adulatory reflections on a historic presidency sure to fuel hope for future elections.