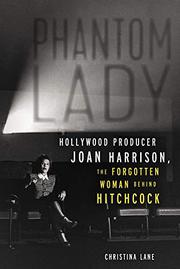 A close-up look at the career of an influential woman screenwriter and producer in Hollywood.

Lane (Film Studies/Univ. of Miami; Magnolia, 2011, etc.) depicts Joan Harrison (1907-1994) as an unconventional woman who was the most enduring assistant and colleague that Alfred Hitchcock ever had. “Harrison would contribute to all of Hitchcock’s late British achievements…and his early Hollywood successes….Together, these films established Hitchcock as a master of the seriocomic thriller and gothic suspense.” The author continues, “plainly put, Alfred Hitchcock would not have become ‘Hitchcock’ without her.” The title refers not only to the “noir gem” that Harrison made for Universal Pictures in 1944, a film that featured a resourceful, independent woman, but also to Lane’s desire to restore the reputation of Harrison, who has been largely overlooked in Hollywood histories despite her stature at the time as “the most powerful woman producer in Hollywood.” The author closely follows her ambitious and clever subject’s career from her initial interview with Hitchcock at age 26 to her death at 87. While Lane’s attention to the details of Harrison’s career may seem excessive, what she reveals about the making of some of Hitchcock’s films is fascinating. As she chronicles Harrison’s journey from secretary to screenwriter to producer, she takes readers behind the scenes of such films as The Lady Vanishes, Jamaica Inn, and Rebecca as well as many others that Harrison worked on with Hitchcock. We learn about casting decisions, script changes, the strengths and weaknesses of various actors, and the power of the studio moguls and censors. Lane also shows how Hollywood reacted to the redbaiting scare and the blacklisting that followed. The narrative is not all business, however. The author shows Harrison hobnobbing with celebrities in nightclubs, marrying the novelist Eric Ambler, and living well abroad.

A solid addition to the growing literature about women filmmakers, with greatest appeal to Hitchcock fans and movie lovers.