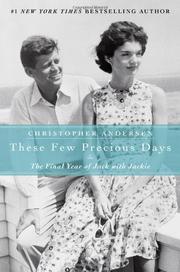 A sometimes-revealing but never earth-shattering portrait of John and Jacqueline Kennedy’s life in the White House—only within whose walls and only at the very end would they “finally bridge the yawning emotional chasm between them.”

Much-practiced celebrity biographer Andersen (Mick: The Wild Life and Mad Genius of Jagger, 2012, etc.) digs beneath the surface—and certainly deeper than in many of his other books—to examine the essential loneliness of both Jack and Jackie, both the products of privilege, both essentially abandoned, and both tough and independent. (Both were voracious readers, too, and of better things than celebrity biographies.) Jack channeled his emotional neediness through womanizing (and, courtesy of Andersen’s careful approach, we learn his pet name for his penis), including an undeniably sordid episode with a drunk teenager on Jackie’s own bed. Jackie channeled hers, in part, by riding horses, which occasioned barbs among the pair, he saying it was a sport that “appeals to some awfully dull people,” she saying, “I think Liberace looks in the mirror less often than Jack does.” But after the loss at birth of their son, Patrick, the two drew together, with JFK concerned that Jackie would slip into depression. Then came Dallas, and with it, Jackie’s steady role in holding the nation together in a profound moment of grief—grief that, as befit her character, she nursed in private. Andersen is evenhanded, but even so, he slips into the overstated clichés of the genre, as when after Jackie’s death: “Americans…contemplated what their world would be like without this living, breathing reminder of a man and an era of political idealism that…seemed at one time to hold so much promise.”

JFK completists may find this useful, but Caroline Kennedy’s recent collection of interviews with her mother should be readers’ first pick.