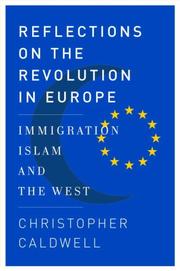 REFLECTIONS ON THE REVOLUTION IN EUROPE

The revolution referenced in the title is sometimes so quiet as to be unnoticed—if one is not living in Germany, England, Spain or France. Those countries are being transformed by increasing numbers of Muslims radicalized to despise the very democracies into which they have immigrated—or, increasingly, have been born. “Scale matters,” writes Caldwell. If the United States had proportionate numbers to France, “it would have close to 40 million Muslims, concentrated in a handful of major cities and poised to take political control of them.” The author’s tone is not alarmist, but it is urgent, and the question of political control lies at the heart of his argument. What happens to Europe if its institutions are dismantled by those who believe in an authority other than the will of the people? Caldwell gives specific weight to the view that Islam in its current iterations is hostile to assimilation and instead bent on overwhelming other ways of thought. “When an insecure, malleable, relativistic culture meets a culture that is anchored, confident, and strengthened by common doctrines,” he concludes, “generally the former…changes to suit the latter.” The author examines Western responses to the demographic and ideological shift, none of them completely adequate—though Nicholas Sarkozy’s idea that Muslims doff the veil when entering secular society just as he removes his shoes on entering a mosque is a start.

Caldwell’s analysis is calm and forceful, and it provides excellent background for a much-needed discussion.