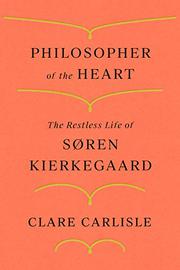 PHILOSOPHER OF THE HEART

The 19th-century thinker who inspired existentialists grounded his philosophy in individual experience.

Carlisle, a London-based professor of philosophy and theology, offers an empathetic, well-grounded biography of the Danish philosopher, prolific author, and “spiritual seeker” Søren Kierkegaard (1813-1855). His overarching question, posed by Socrates and later taken up by 20th-century existentialists, was: “How can I be a human being in the world?” Human nature, Kierkegaard argued, “is not a fixed, timeless essence, nor a biological necessity, but a creative task for each individual life.” His conviction about personal evolution made him suspicious of marriage, the “duties, customs, expectations” required of a husband that might constrain him and impede his ability to express his spiritual life. In addition, he feared being completely open with another person. Once engaged to be married, he ended the relationship rather than reveal to his betrothed the “melancholy, the eternal night brooding,” and the “desires and excesses” that caused him great anxiety. The renouncement haunted him for the rest of his life, as did his relationship with his father, a “forbidding, complex” man whose religious ideas became antithetical to those of his son. The Lutheran Church failed to offer Kierkegaard a sacred refuge. “Does he find any more truth there,” he asked himself, “than in the theatre, or the lecture hall, or the marketplace—or have churches become the least truthful places in Christendom?” For Kierkegaard, the story of Abraham’s journey up and down Mount Moriah became emblematic of “the religious movements—the deep longing for God, the anxious struggle to understand his vocation, the search for an authentic spiritual path—that shaped his own inner life.” Rather than create a conventional chronological narrative, Carlisle moves back and forth in time to underscore how “past and future are vibrant inside us” as she judiciously mines Kierkegaard’s works and considerable scholarship to elucidate the philosopher’s life, mind, and struggles.

A perceptive portrait of an enigmatic thinker.