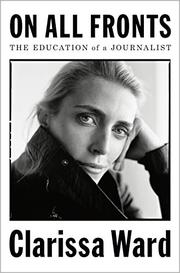 The Education of a Journalist
by Clarissa Ward
BUY NOW FROM
AMAZON
BARNES & NOBLE
LOCAL BOOKSELLER
GET WEEKLY BOOK RECOMMENDATIONS:

A London-based foreign correspondent looks back on a career covering life in war zones.

Now chief international correspondent for CNN, Ward, who has won an Emmy and two Peabody Awards, was the only child of a wealthy American mother and a British investment banker father who separated when she was young. Raised first in New York and then in London, the author studied comparative literature at Yale until 9/11 inspired her to seek a career in journalism. Beginning with an overnight desk assistant's job at Fox News, where she experienced the “pervasive sexism” others have reported there, she worked her way up in journalism, adding Arabic to the five languages she already knew. Along the way, she spent time in Moscow, Baghdad, and Beirut, sometimes embedded with troops and sometimes hanging out in hotels with other journalists waiting for a story to break. Her descriptions of her experiences at all the sites are vivid and precise. Among the assignments that clearly meant the most to Ward were her several stints in Syria, where several sources to whom she became close disappeared, leaving her both bereft and conscious of her own privilege as a foreign journalist able to leave the country. Even more than her other jobs, the time in Syria taught her that “the idea of 'making a difference' in journalism is as seductive as it is dangerous….The reality is that we are not there to solve the problem, we are there to illuminate it.” Although Ward focuses more on her assignments than her inner life, it's obvious that as her time on the job continued, she suffered physical and emotional tolls, and the risk of “burning out amid one high-pressure trip after another” became higher. At the end of the book, she writes about how, after a brief respite for a marriage and the birth of a baby following a pregnancy that placed her at risk of contracting malaria in Bangladesh, she was back in the field in Afghanistan.

A thoughtful account of the excitement and pitfalls of war reporting.