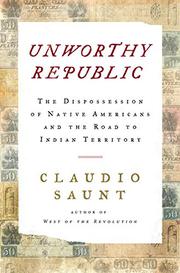 The Dispossession of Native Americans and the Road to Indian Territory
by Claudio Saunt
BUY NOW FROM
AMAZON
BARNES & NOBLE
LOCAL BOOKSELLER
GET WEEKLY BOOK RECOMMENDATIONS:

A powerful, moving argument that the state-sponsored expulsion of the 1830s was a horrendous turning point for the Indigenous peoples in the United States.

The systematic expulsion of Native Americans—Saunt (American History/Univ. of Georgia; West of the Revolution: An Uncommon History of 1776, 2014, etc.) uses “deportation,” “expulsion,” and “extermination” as more accurate terms than “removal”—would not have happened without a law passed by Congress and approved by the executive branch, which occurred at the end of May 1830. The largely Southern-backed measure eagerly endorsed by President Andrew Jackson, who had made the “voluntary” movement of Native peoples west of the Mississippi a defining point of his candidacy, began implementation with money to remove the largely prosperous farming Choctaw of the South westward. These were the first peoples to be expelled under the 1830 law, which allowed their land to be appropriated by whites. It was an expensive and chaotic operation, not to mention horrendously inhumane, as those forced off their land endured miserable conditions, as observed and documented by Alexis de Tocqueville in late 1831. Other expelled peoples included the Senecas of Ohio and the Sauk and Meskwaki on the Wisconsin and Mississippi rivers, and Saunt poignantly chronicles the movements of the dispossessed. When cholera broke out, it decimated these Indigenous communities on the move. The author incisively examines the various fictions propagated at the time to assuage the national conscience about the dispossession—e.g., that Native peoples were a desperate people dying out (many were quite prosperous) and that they were leaving their homes voluntarily. Moreover, the lands west of the Mississippi were not known or mapped, and the conditions were barren and uninhabitable. Saunt estimates the enormous wealth lost by the Indigenous families, the millions expended by the government, and the hideous wealth in land and resources gained by the speculators, colonizers, and cotton barons. The author also notes how these systematic mass deportations “became something of a model for colonial empires around the world.”

A significant, well-rendered study of a disturbing period in American history.