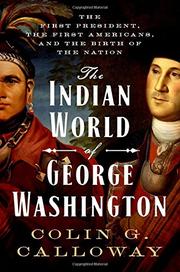 THE INDIAN WORLD OF GEORGE WASHINGTON

The First President, the First Americans, and the Birth of the Nation
by Colin G. Calloway
BUY NOW FROM
AMAZON
BARNES & NOBLE
LOCAL BOOKSELLER
GET WEEKLY BOOK RECOMMENDATIONS:

An expansive history of our first president and his interactions with Indian countries and how “the future he envisioned would be realized at the expense of the people who lived there.”

During George Washington’s presidency, the bulk of the federal budget was spent on wars against Indians and their affairs. After beginning with this jolt, Calloway (History and Native American Studies/Dartmouth Coll.; The Victory with No Name: The Native American Defeat of the First American Army, 2014) delivers a detailed, impressively researched history of white-Indian relations during Washington’s lifetime. An ambitious young man in the 1750s, Washington already owned shares in the Ohio Company, which claimed immense tracts mostly in present-day Ohio. He made numerous official trips to assert his claims and those of the British, oppose the rival French, and recruit Indian support. All failed, culminating with Gen. Edward Braddock’s disastrous defeat in 1755. Historians traditionally describe this as a painful education that contributed to Washington’s later greatness, but Calloway maintains that ignorance of Indian culture and bad military advice bear major responsibility for the debacles. Many tribes sided with Britain during the Revolution, and Washington responded with cruel, almost genocidal campaigns that laid waste cities and farms and killed everyone in sight. Calloway concludes that “Washington spent a lifetime turning Indian homelands into real estate for himself and his nation,” and as president, he worked hard to further this agenda. It involved several brutal frontier wars, described ably by Calloway; however, readers will also have to wade through tedious diplomacy, negotiations, treaties, and bickering. At his death, Washington owned tens of thousands of acres of former Indian land, and frontier tribes were in steady retreat. Calloway is no revisionist. Historians agree that Washington’s treatment of Indians was marked by self-interest, ignorance, and racism, but they prefer to emphasize areas where he did better.

Insightful and illuminating but relentlessly squirm-inducing.

THE VICTORY WITH NO NAME
by Colin G. Calloway
Nonfiction

THE SHAWNEES AND THE WAR FOR AMERICA
by Colin G. Calloway
Nonfiction

THE SCRATCH OF A PEN
by Colin G. Calloway
Nonfiction

NEW WORLDS FOR ALL
by Colin G. Calloway

THE ASCENT OF GEORGE WASHINGTON
by John Ferling
Nonfiction

THE VICTORY WITH NO NAME
by Colin G. Calloway
Newsletter sign-up