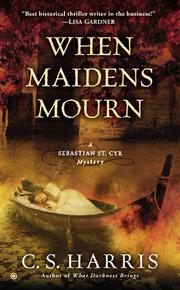 The search for Camelot disrupts a honeymoon in 1812.

Four days into the pregnancy-driven marriage of Sebastian St. Cyr, Viscount Devlin, and Hero Jarvis, daughter of his sworn enemy, Miss Gabrielle Tennyson, an antiquarian who insisted that Camelot was located on the tiny bit of land known as Camlet Moat, is found floating in the moat, stabbed to death. When Bow Street calls upon Sebastian to deal with the death, Hero, a friend of Gabrielle, decides to nose around too. The first order of business: find out what has become of the vanished cousins who were with Gabrielle, young masters George, 9, and Alfred, 3. While their father is organizing a search for the boys, Sebastian focuses on possible motives for Gabrielle’s slaying. She had had a tiff with another antiquarian about King Arthur and the authenticity of a supposed relic, the Glastonbury cross. But Hero’s father, Lord Jarvis, also arouses suspicion through his parliamentary ties and his plotting against Napoleonic spies trying to destabilize the monarchy, including one whose heart may have belonged to Gabrielle. Then an estate manager is shot dead in the moat and the lovelorn French lieutenant dies. Although Sebastian sorts through the various motives and culprits, he still can’t find the two boys. Their fate can be determined only by a detailed inspection of the Tennyson lineage that finally leaves time for Sebastian and Hero to resume the more passionate aspects of their honeymoon.

History buffs will have a heyday hobnobbing with the Tennysons, “discovering” Arthur’s burial site, dabbling in Druid enlightenment and siding with the Brits over Napoleon. Romantics will pine once more over Sebastian (When Shadows Dance, 2011, etc.).

WHO SLAYS THE WICKED
by C.S. Harris
Mystery

WHY KILL THE INNOCENT
by C.S. Harris
Fiction

WHERE THE DEAD LIE
by C.S. Harris
Mystery

WHO BURIES THE DEAD
by C.S. Harris
Mystery

WHY KINGS CONFESS
by C.S. Harris

THE RIDDLE OF ALABASTER ROYAL
by Patricia Veryan
Mystery