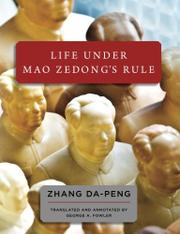 In this lengthy memoir, a Hong Kong–based entrepreneur and investor recounts his life in China under the totalitarian Communist regime of Mao Zedong.

Zhang (The Golden Road, 2012, etc.) creates an alter ego, Shanghai-bred Zhuang Xiaoping, to serve as the protagonist of his ambitious retelling of the mass insanities during Mao’s reign. The book traces the almost unimaginable travails of the crafty, resilient Shanghai-bred Zhuang and his relatives, friends and acquaintances as they strive to survive a stultifying, terrifying epoch, when failure to revere Chairman Mao could be fatal. The book focuses on the period from 1949, when Mao took power, to 1977, after Deng Xiaoping succeeded him and the social turmoil of the Cultural Revolution had finally abated. The young Zhuang is burdened by a “bourgeois” background that constantly causes people to suspect him of capitalistic sentiments, but he learns early on to keep his mouth shut. Later, he becomes the target of party functionaries and fellow students during humiliating political “struggle” sessions in college. Later, he adjusts to zealous Red Guard teams ritually ransacking his home in search of counterrevolutionary evidence. Only in 1979, when Zhuang is on the brink of middle age, do he and his family finally slip into Hong Kong using forged papers. Zhang’s writing is serviceable throughout, but he particularly excels at reproducing mind-numbing Maoist jargon. However, a more detailed recounting of Zhuang’s obligatory political sessions at college might have added to the narrative. The author’s use of fictional characters may make readers wonder how closely the story adheres to his actual life experiences. That said, he still delivers a satisfying portrayal of the tenor of existence under Mao.

A somewhat long but highly readable and historically valuable memoir of China.