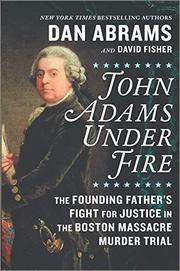 The first shots in the American Revolution occurred during the Boston Massacre, and this history describes the trial that followed, certainly “the most important case in American colonial history.”

On March 5, 1770, British soldiers, harassed by a mob throwing snowballs and rocks, fired into the crowd, killing five and injuring six. Abrams, the chief legal affairs correspondent for ABC News, and prolific author Fisher (co-authors: Lincoln's Last Trial: The Murder Case That Propelled Him to the Presidency, 2018) write that the 34-year-old Adams, a successful lawyer who was sympathetic to the protestors, agreed to defend the officer and eight soldiers accused of murder. He would later write, “Counsel ought to be the very last thing an accused person should want in a free country….” This was a moderately courageous act that did his growing law practice no good. To his dying day, Adams grumbled that opponents used the trial to impugn his patriotism. This may have been true, but since then, historians have given him high marks. There were two trials. In the first, the defense had little trouble convincing the jury that Thomas Preston, the officer in charge, did not order his men to fire. In the second, Adams and colleagues strived to show that the soldiers feared for their lives, thus giving them the right to kill in self-defense. They largely succeeded. The jury exonerated six and convicted two of the lesser charge of manslaughter. The letter “m” was burned onto their thumbs as punishment. A transcript exists of the soldiers’ trial, which is perhaps too much of a good thing, as the authors quote liberally from it. Despite variations, readers will encounter perhaps 100 pages of witnesses’ descriptions of the same event followed by several lawyers’ careful reviews of those that support the case. Many readers will feel the urge to skim these parts, but on the whole, the narrative is engaging.

THEODORE ROOSEVELT FOR THE DEFENSE
by Dan Abrams
Nonfiction

THEODORE ROOSEVELT FOR THE DEFENSE
by Dan Abrams
Nonfiction