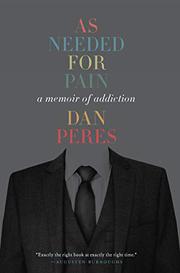 AS NEEDED FOR PAIN

A memoir from a prominent journalist who was addicted to opiates.

Peres, the former editor-in-chief of Details magazine, makes his debut as a memoirist with an unflinching account of addiction and hard-won recovery. The author was prescribed Vicodin after a back injury and two surgeries, and he recalls how it made his whole body “warm and relaxed. I felt like I’d been wrapped in an electric blanket.” After the back pain subsided, he stopped taking the pills, until one evening, getting ready for bed, he impulsively decided that swallowing a few would help him relax. It was, for Peres, a critical moment. Within a year, he was taking 15 pills four times per day. Soon, he lost count of how many he needed: 16, 18, 21 at a time, multiple times daily, and he graduated to the stronger opiate Roxicodone. “I was feeding a beast and it was always hungry,” he admits. To keep up the supply needed to avoid “the hell of withdrawal,” he went to different doctors, feigning severe back pain. “I knew the names of the doctors listed in the pain management section of the phone book the way some men know the starting lineups of the hometown baseball teams from their youth,” he writes. Peres avoided those who wanted to send him for physical therapy, but he agreed to get X-rays or MRIs; after all, he had surgical scars. His back pain was believable. With addiction narratives forming an autobiographical subgenre, Peres’ memoir is in many ways predictable: his obsession with what he calls his “pharmaceutical ambitions”; his ability to function at work despite arriving late, napping during the day, and constantly rescheduling appointments; the shocking ease of finding compliant doctors; his pushing away of family and friends. The author alludes to—but doesn’t examine—several personal problems that possibly fueled his addiction: depression, insomnia, and “crippling insecurity” that made him hungry for validation. He eventually kicked his habit, and readers will hope his resolve lasts.

A frank revelation about the all-consuming power of addiction.