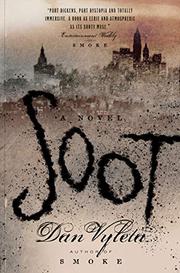 A return to the Dickensian-dystopian world of Smoke (2016).

Let’s welcome, once again, to a smoke-filled stage your three favorite teenage characters from Smoke, Thomas Argyle, Charlie Cooper, and Eleanor Renfrew, along with a vast array of supporting characters, old and new. Vyleta organizes his bulky novel like a play, with five acts, numerous scenes, and an intermission, interspersing memoranda, letters, and diary entries throughout. It's 1909 in England, 10 years after Thomas, Charlie, and Livia Naylor released Smoke, a visible marker of sin and emotion that the authorities wanted to control. They hoped it would bring about a cultural and political revolution. They were wrong. In Saint John, New Brunswick, elderly playwright Balthazar Black, the grandson of a slave, is putting on a Smoke Theatre skit about Charlie and Thomas—“There is not a story more widely told than theirs.” The audience, suddenly realizing who the actors are playing, gasp. Fake smoke fills the room. Black discovers that Eleanor Renfrew is in the audience. She's the niece of Erasmus Renfrew, who taught at Charlie and Thomas' school and is now the imperious Lord Protector. Balthazar, Eleanor, and the troupe of players sail to New York to foil a dastardly plan of Renfrew's. Meanwhile, Mr. Smith, who works for the powerful Company, has his own plans for gaining power. People have fled to the Minetowns, where they’ve set up their own Workers' Council in Ekklesia, a "giant hollow in the ground." Vyleta’s labyrinthine tale adds subplots upon subplots. We meet Mowgli, a South American boy whose body may have been used to unleash the Smoke. Charlie has ventured to the glaciers of the Himalayas, seeking to discover the origins of Smoke. Could it reside in a dull, velvet-black rock? What unique powers do beetles, sweets, and Smoke Poppies possess? Who is this Angel of the North? Can it save them from Smoke? All about, Black Storms and Gales rage.