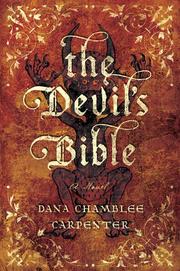 Mouse is back to fight the forces of darkness with the help of a handsome priest in Carpenter’s (Bohemian Gospel, 2015) sequel.

Year 1278: after she kills thousands of men, including her husband and son, by accidentally unleashing her dark powers, Mouse seeks penance by scripting a single volume that contains all of man’s knowledge. But though she goes into extreme seclusion to write, her father, Lucifer, begins to visit her and aids her in compiling stories and art for her book. Flash-forward 700 years: after centuries of drifting, hiding, and living with an almost unbearable guilt, Mouse has, for the first time, become comfortable in her invented life as a college lecturer. She even owns a cat. But when a former student shows up with information on the so-called Devil’s Bible, Mouse finds herself again on the run from her father and his minions. Determined to end her own life before she can be used as a weapon, she retreats to Italy where she is saved by a young aspiring priest, Angelo. With his help, his trust, and, eventually, his love, Mouse finds the Devil’s Bible and confronts the maniacal traps laid for her by her father—only to learn that he has created a new instrument of destruction. Carpenter’s second installment in what will clearly be at least a trilogy contains much less historical resonance and fewer deep moments of horror than her first outing, but there are still riddles enough to please and break up the somewhat monotonous characterizations. Mouse seems less spunky and wild, tamed, we can assume, by her centuries of lonely survival, and Angelo is a one-note romantic lead.

THE DAUGHTERS OF TEMPERANCE HOBBS
by Katherine Howe
Children