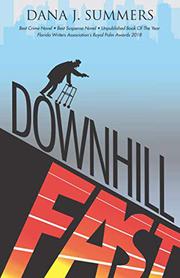 A hired killer desperately tries to stay one step ahead of a kingpin’s goons in this novel.

From pedophiles to rapists, Lou Braga disposes of “the garbage the justice system leaves by the curb.” But at the age of 68, the efficient killer is at high risk of a stroke or heart attack. A doctor emphatically urges him to get bypass surgery: “A convenient time is now.” But at present, Braga relates, “Convenient isn’t a word that springs to mind. I have a ruthless crime boss who wants me dead, a duffel bag full of stolen cash, a psycho who thinks he’s a renegade Indian warrior stalking me, and the grandson I never knew I had.” Plus, there is his estranged, substance-abusing daughter, whose life he has put into peril by stealing a half-million dollars 25 years ago from the dreaded Benny Epstein, “the kind of guy who never plays by the rules, always wins, and leaves death in his wake.” Epstein talks the talk (“You probably heard about me. About how I hate big mouths?” he threatens a disrespectful underling. “About what happens to people who have them?”). And though he lives in an assisted living facility, he operates his business “like a geriatric godfather,” according to Braga. Convinced that Epstein is responsible for the car accident that claimed his beloved girlfriend’s life, Braga is determined that for once he will get to see the kingpin lose. But first, he must reconnect with his daughter, Mia, and convince her to get out of town; rescue his dog that Epstein ordered kidnapped; and go up against a number of the crime boss’s vicious henchmen. The title of nationally syndicated cartoonist Summers’ (The Dark and the Dead, 2018, etc.) third novel seems to be baiting snarky critics, but downhill this thriller isn’t. Fast, yes; the pace rarely flags, beginning with Braga’s racing to get to his daughter before Epstein’s thugs do. There are several brutally suspenseful set pieces. Once readers know what the killers are capable of, it’s doubly effective when the author leaves their dirty work to the audience’s imagination. Less successful are the random chapters that provide other characters’ perspectives.

Readers will find this crackerjack thriller hard to put down.