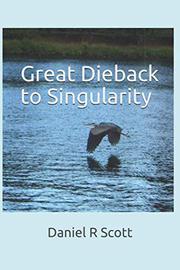 In Scott’s debut SF epic, the big-think narrative starts out as a faux history book of a 21st-century global-warming catastrophe that kills half of Earth’s human population with an apology to readers. Rather than grieving the “Great Dieback” fatalities, the work will follow key survivors attempting to put the world back together. Chief among them: attractive orphan twins Addison and Ainsley Cameron, prodigies in the fields of technology and bioengineering. In 2028, they are at the University of Wisconsin-Madison and on the verge of a pivotal advance in achieving “singularity,” the melding of humans, intelligent machines, and software. But then Armageddon hits, with storms, volcanic eruptions, nuclear strikes, and a fearsome Sino-Russian war. The Camerons find protection on a well-guarded Native American reservation that, by 2033, is the start of an enlightened new state, the Great Plains Union. Other parts of the globe—where infrastructure and internet remain—are also reconstituting themselves for an uncertain future, some with wicked intentions. The intrepid Camerons temporarily separate. In Europe, Addison infiltrates the cabal of Count Grubenflagg, conducting Frankenstein-like research to create supersoldiers. In China, an ex-lover of Ainsley’s is a deep-cover agent in the technocracy, secretly coaxing a Taiwan-based AI into service without triggering a nuclear bomb by authorities, who fear the singularity. Back in the GPU, Ainsley observes the start of diplomatic relations with the sketchy “Texican Territories” to the south. She will eventually travel to China. In all three theaters of action in this series opener, the protagonists take care how much they reveal and to whom. Sometimes significant developments recede into the cyberfoliage as the plot hopscotches from one hemisphere to another, and the denouement is practically a rising sea level of cliffhangers. Readers who are hooked will be eager for the next volume. Scott manages to deliver persuasive dialogue by individual AIs (groping for ethical behavior), and there are shoutouts to the robot literature of Isaac Asimov, a clear narrative role model. One recurring aspect of the dense story the author never quite explains is the escalated sexual violence—rape is so widespread that the Camerons offer women a popular body modification called “the Clipper,” an emergency vagina dentata. Another horror to pin on global warming?

An engaging, globe-trotting post-apocalypse tale that should appeal to Asimov fans.

All Hailed The Singularity
by Dan Pausback
Indie