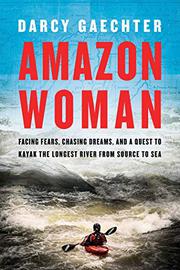 A well-paced tale of outdoor adventure.

“We are all, I suppose, confined to specific destinies and mine seems to be chasing rivers.” So writes Gaechter, who decided to mark her 35th birthday—making her ancient, by competitive kayaking standards—by traveling the length of the Amazon River from source to outlet. Why do such a thing? Because it’s there, of course, and no woman had been known to do it before, and there’s no time like the present. Still, in the company of her longtime partner and a like-minded Brit, she tackled the project, emerging 148 days later after crossing South America from the Andes to the Atlantic. The physical challenges were extraordinary, although, the author notes, “keeping a cool head is the most important skill in kayaking, though by far the most difficult to master.” There were plenty of opportunities to exercise that skill, for on top of the churning whitewater rapids and odd critters were the more dangerous denizens of the rainforest, including illegal loggers, Shining Path guerrillas whose “primary operations…now happen in remote jungle areas and involve the lucrative drug trade,” and soldiers of fortune who could be quick with the trigger finger. Then there were the more quotidian culture clashes, for, as Gaechter patiently notes, “time is a point of contention between North Americans and Peruvians,” making an important rendezvous all the more difficult to schedule. Was it worth dying in that jungle war zone in order to exercise her coveted freedom, she asks? The answer was no—but then again, as she writes, “I’d invested a lot of time and suffering already,” reason enough to press on to the next canyon, rapid, anaconda, sulk, argument, and bad feeling (“I didn’t want the person I loved acting like an asshole and lunatic, and that’s what I often felt Don was doing”) while vanquishing inner doubts. The author includes a glossary of kayak terms.