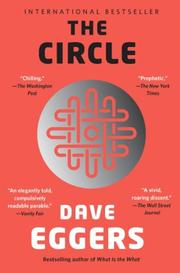 A massive feel-good technology firm takes an increasingly totalitarian shape in this cautionary tale from Eggers (A Hologram for the King, 2012, etc.).

Twenty-four-year-old Mae feels like the luckiest person alive when she arrives to work at the Circle, a California company that’s effectively a merger of Google, Facebook, Twitter and every other major social media tool. Though her job is customer-service drudgework, she’s seduced by the massive campus and the new technologies that the “Circlers” are working on. Those typically involve increased opportunities for surveillance, like the minicameras the company wants to plant everywhere, or sophisticated data-mining tools that measure every aspect of human experience. (The number of screens at Mae’s workstation comically proliferate as new monitoring methods emerge.) But who is Mae to complain when the tools reduce crime, politicians allow their every move to be recorded, and the campus cares for her every need, even providing health care for her ailing father? The novel reads breezily, but it’s a polemic that’s thick with flaws. Eggers has to intentionally make Mae a dim bulb in order for readers to suspend disbelief about the Circle’s rapid expansion—the concept of privacy rights are hardly invoked until more than halfway through. And once they are invoked, the novel’s tone is punishingly heavy-handed, particularly in the case of an ex of Mae's who wants to live off the grid and warns her of the dehumanizing consequences of the Circle’s demand for transparency in all things. (Lest that point not be clear, a subplot involves a translucent shark that’s terrifyingly omnivorous.) Eggers thoughtfully captured the alienation new technologies create in his previous novel, A Hologram for the King, but this lecture in novel form is flat-footed and simplistic.

Though Eggers strives for a portentous, Orwellian tone, this book mostly feels scolding, a Kurt Vonnegut novel rewritten by the Electronic Frontier Foundation.

THE CAPTAIN AND THE GLORY
by Dave Eggers
Fiction

THE PARADE
by Dave Eggers
Nonfiction

THE MONK OF MOKHA
by Dave Eggers
Fiction

HEROES OF THE FRONTIER
by Dave Eggers
Fiction

YOUR FATHERS, WHERE ARE THEY? AND THE PROPHETS, DO THEY LIVE FOREVER?
by Dave Eggers
Nonfiction

ALL YOU CAN PAY
by Anna Bernasek
Fiction

YOU ARE NOT A GADGET
by Jaron Lanier
Nonfiction